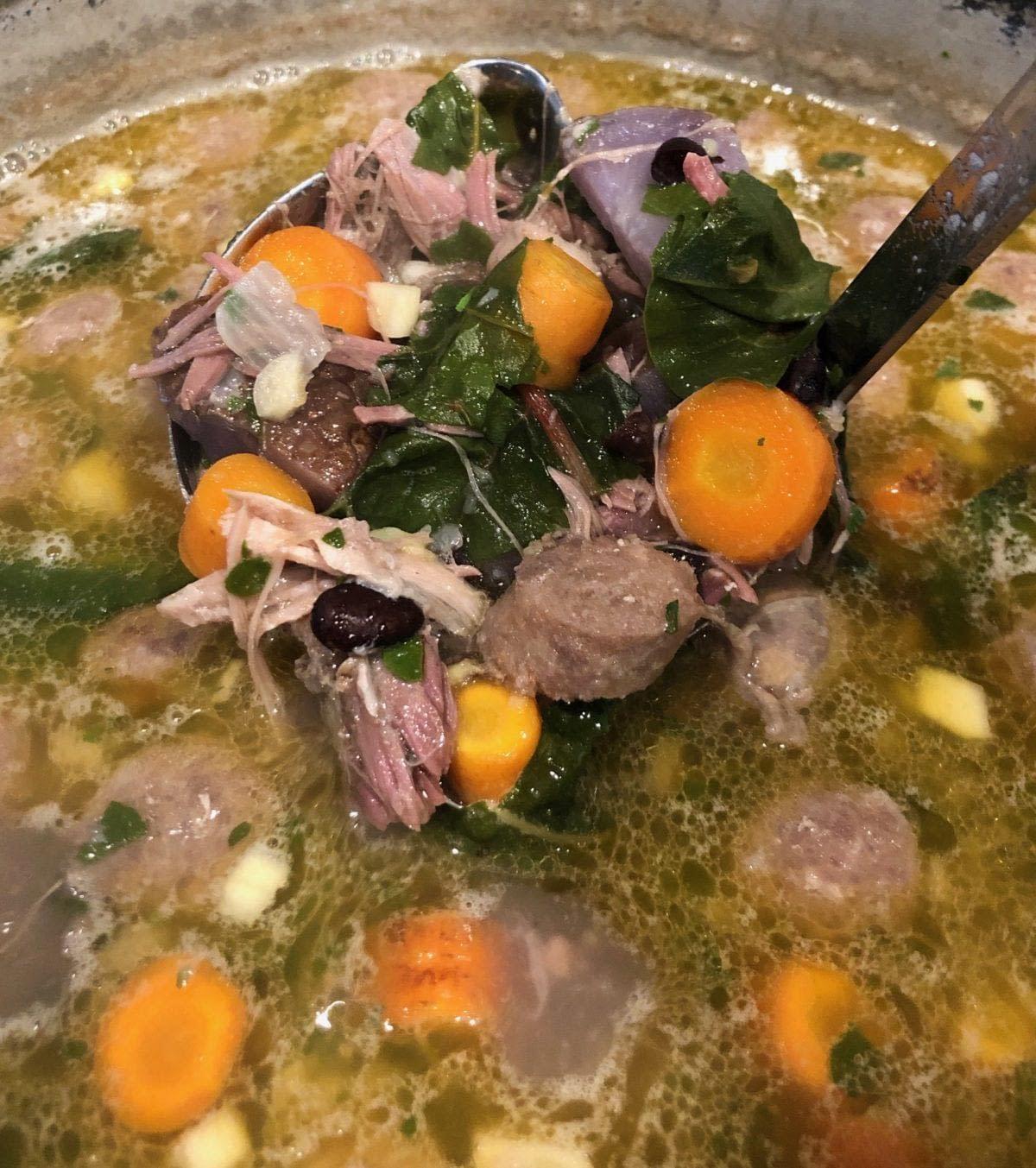 This is one of my favorite stew recipes. I made this recipe yesterday and the house smelled great all day while the broth was simmering. A fresh pork hock (also known as a ham hock) is perfect for soups and stews and deserves more credit than its given. This cut is from the leg area directly below the ham and has a large bone and good quantity of meat. After simmering in the broth the meat is tender and easily pulls apart. A hock can be used in a recipe that calls for a ham bone – want the smokey cured flavor? Just add a few of slices of bacon! 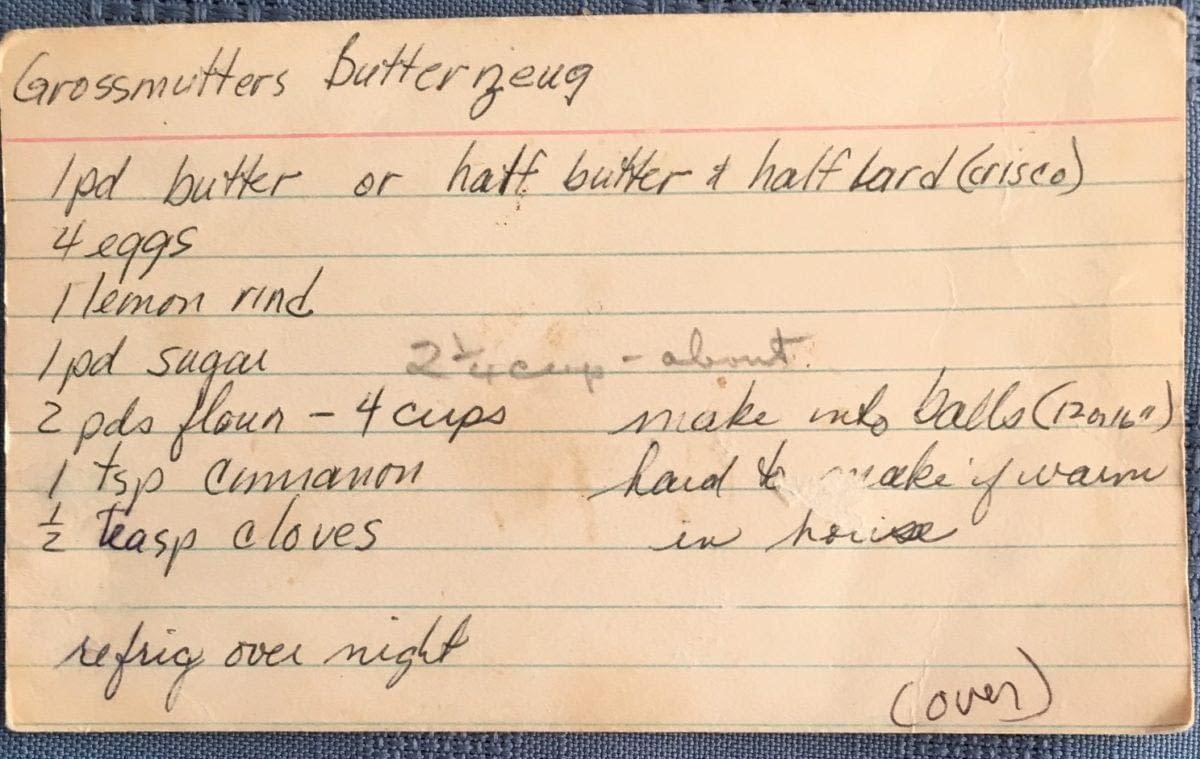 The following  was sent to me by my friend, Elda Stone.  She is new to lard and I was happy to share a jar of leaf lard with her so she could experiment with an old family recipe.  I don’t pretend to be a writer but she is a great one and I’m thrilled that she was willing to take the time to record her thoughts so I could share them here.

My sister Rita and I recently resurrected a cookie recipe that we remembered from childhood. We know it as “Grossmutter’s Butterzeug.”

These cut-out sugar cookies, spiced with cinnamon and cloves, were not my favorite as a kid. They were simple and plain, with no frosting. What, no frosting? But I still remember the distinctive taste, the thinness, and the crisp snap.

Grossmutter is what my dad and his sister called their grandmother Babette Gehbauer Helmreich (1863-1948). Babette came over from Germany just before the start of World War I, joining her daughters who immigrated a decade earlier as teenagers. We never knew Babette, but our aunt and grandma made these cookies every year at Christmas.

Butterzeug calls for butter, of course. Google roughly translates “zeug” (pronounced “zoig”) as “stuff” or “material.” Our handwritten recipe card, recorded by Rita years ago while Grandma made the cookies, calls for a pound of butter or “half butter, half lard.”

Lard – yuck. I had never tried baking with it.

Rita and I made a half-batch of the original recipe over Thanksgiving, using all butter. (A full batch must make a massive amount of cookies!)

Even after chilling, the dough was miserably soft for rolling out and transferring to a baking sheet. It stuck to the mat and rolling pin, falling apart out of the cookie cutters. We managed to bake them, and they tasted reasonably like we remembered our grandma’s cookies, but a little too soft and not as thin.

Having heard my friend Laura of Mossycup Farms talk about the virtues of lard, I wanted to try a “test kitchen” experiment in comparative baking. Laura supplied me with a jar of her home-rendered pork lard, from her organically fed, free-range hogs. It was surprisingly light, fluffy, and brilliantly white.

I again made a small batch of Butterzeug, this time with half butter and half lard. I wrapped two flattened disks of dough in wax paper and chilled them in the fridge overnight.

The next day, the dough was very firm and easy to handle. It took some elbow grease to roll out the chilled disks. I was able to get it thinner than last time, and it still held together. I baked according to directions, same as the all-butter batch.

I had saved a couple cookies from the first batch to compare taste. For ease of handling and texture, the half-butter/half-lard version is better and tastes more like I remember. The cookies are definitely more crisp, possibly because I was able to roll the dough thinner. There’s a shortbread-like crumble to the tongue. This version also browned up a little if I pushed the baking time another minute.

I certainly don’t notice any “porky” flavor from the lard. I’m surprised it resulted in firmer dough and crispier cookies, despite lard’s low melting temperature and light texture.

This article from Prevention magazine sums up the re-evaluation of lard.,  And it sounds much preferable to coconut oil, which has also been touted in recent years. Using half Crisco or other commercial shortening might also make this recipe easier to roll out and cut, but I’m more leery of using a processed product these days.

So that’s my pseudo-scientific study on lard in a cookie recipe! Christmas cookies by any definition are A) only made at Christmas and B) not really supposed to be good for you. It’s more about the taste, texture, and visual delight. Lard delivered the taste of my childhood holidays.

And making this family recipe brings back to life my aunt, my grandma, and my great-grandmother, standing behind me in the kitchen. 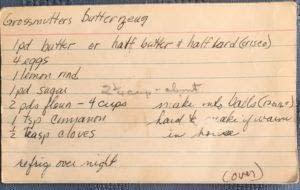 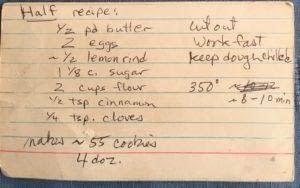 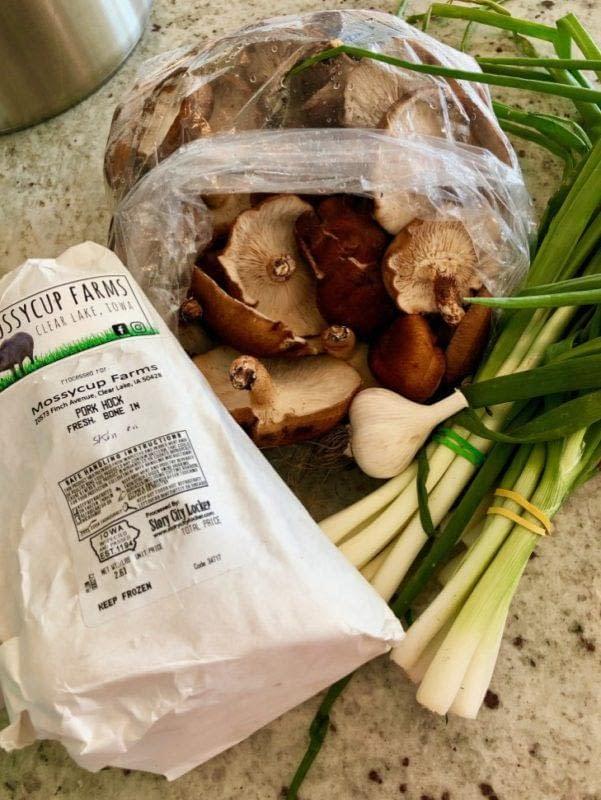 Making bone broth takes time but doesn’t have to be time consuming.  I used to think I needed to watch it the whole time it was cooking but I’ve since realized it can pretty much be left alone.  I’ll often throw a 10 qt pot full of bones, hocks or necks with whatever herbs I have in the garden on the stove in the morning and pretty much forget about it until my house starts to smell amazing which usually means its close to being done.

I stopped at the Clear Lake Farmers Market on Saturday morning and grabbed a few bunches of fresh green onions among other things.  I had purchased shiitake mushrooms from a local producer here in Clear Lake (email me for their contact information if you’d like it) and was looking for more ways to use them.  I love real ramen – not the cheap stuff at the grocery store with a dry seasoning mix – and decided to make it myself (recipe below). 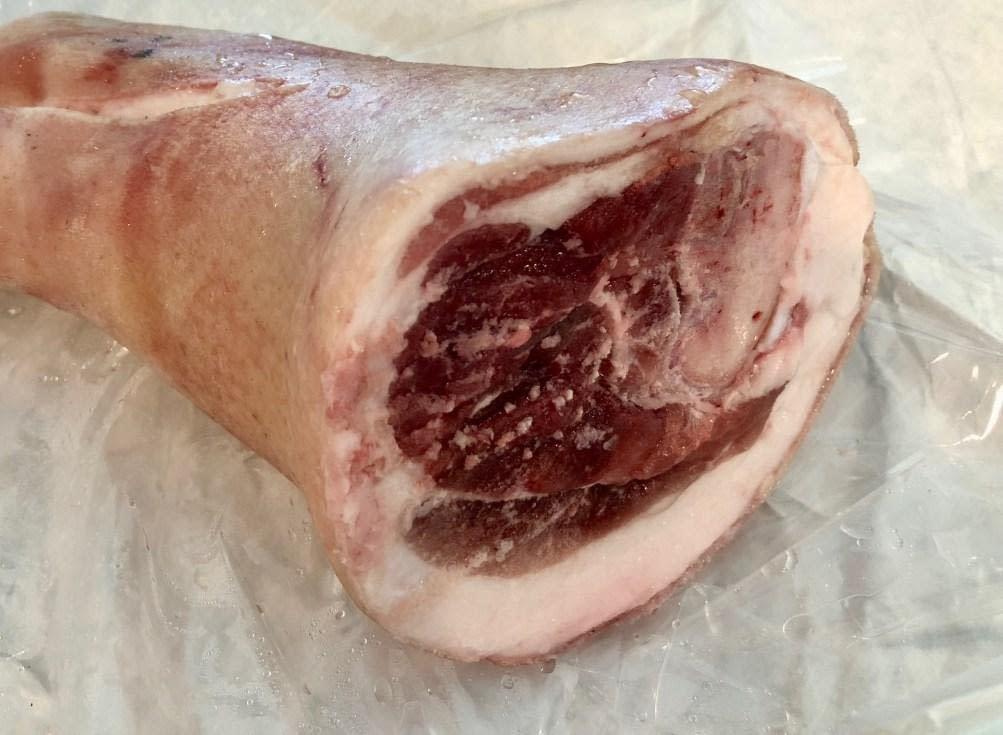 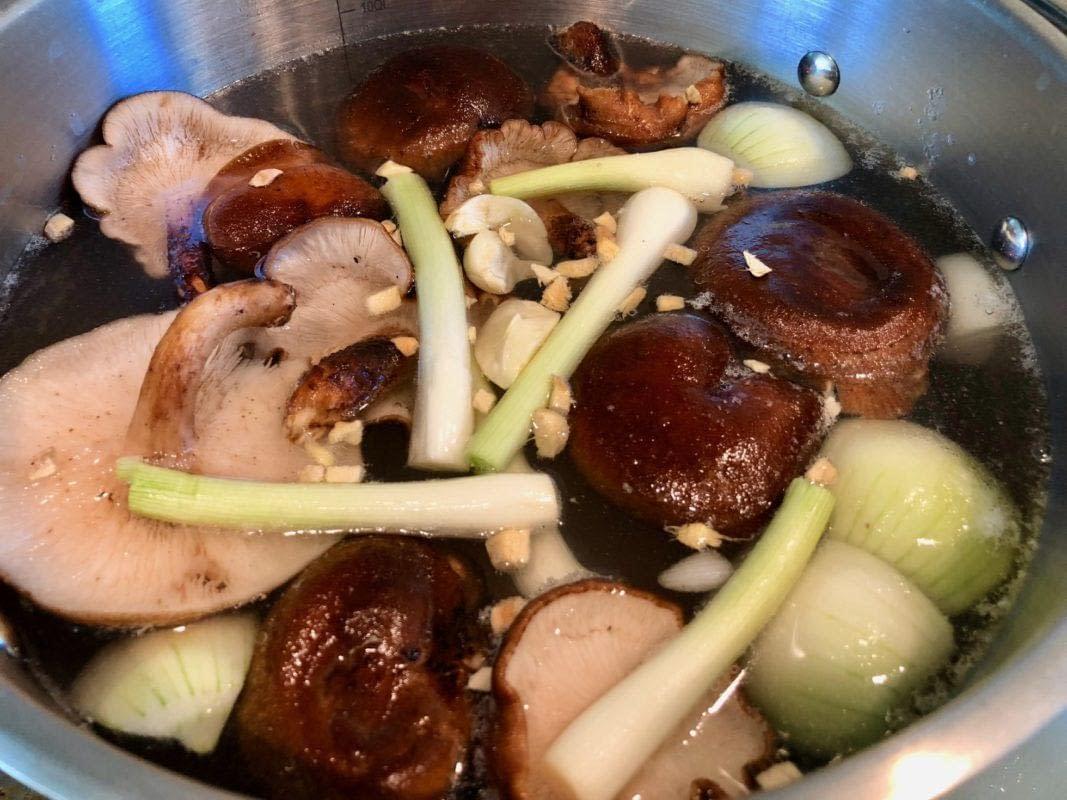 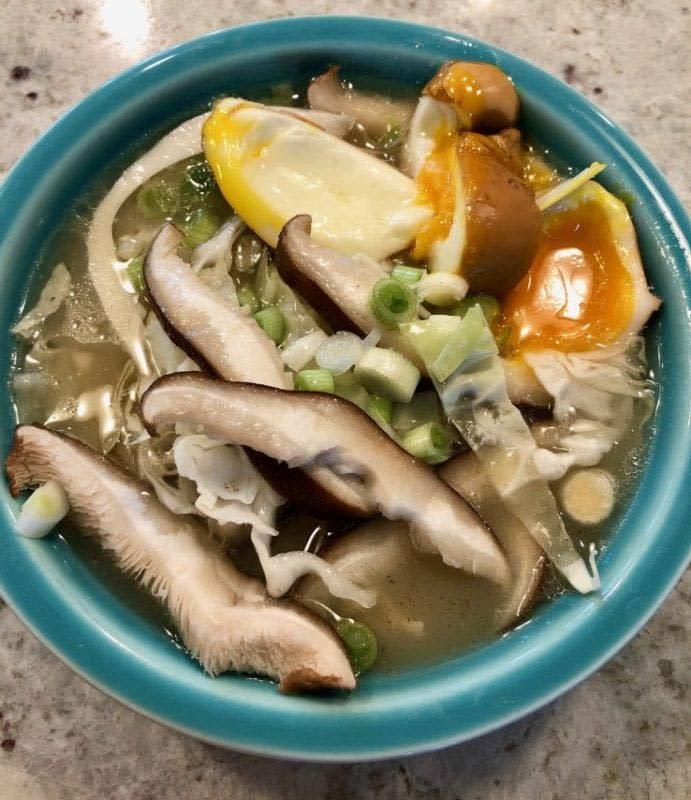 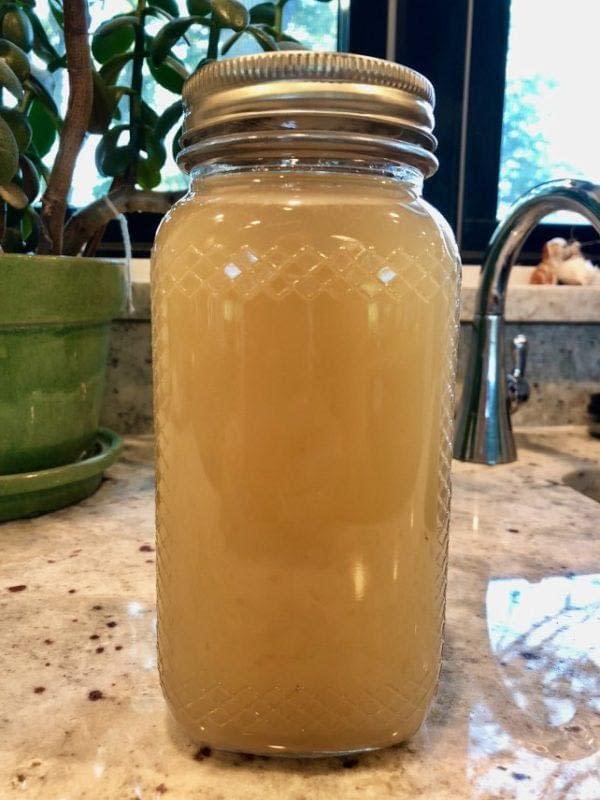 I decided to use pork hocks for the broth in this batch but pork or chicken bones would also work.  The added benefit of hocks is that they’re actually pretty meaty so you get a really nice bone broth and a good amount of meat to serve with your soup.  If you prefer a thicker stock adding a pigs foot or a handful of chicken necks will give you a wonderfully thick, gelatinous broth.  Click Here for a good read on all of the uses for pigs feet.

The recipe calls for 5 quarts of water but I chose to make a double batch and ended up with a full meal for our family plus I was able to jar and pressure can an additional 4 quarts for use later.  Extra broth could also be frozen if canning isn’t your thing.

Here’s the recipe – I hope you enjoy it as much as we did!  Need hocks or bones for your stock?  Contact us to purchase some! 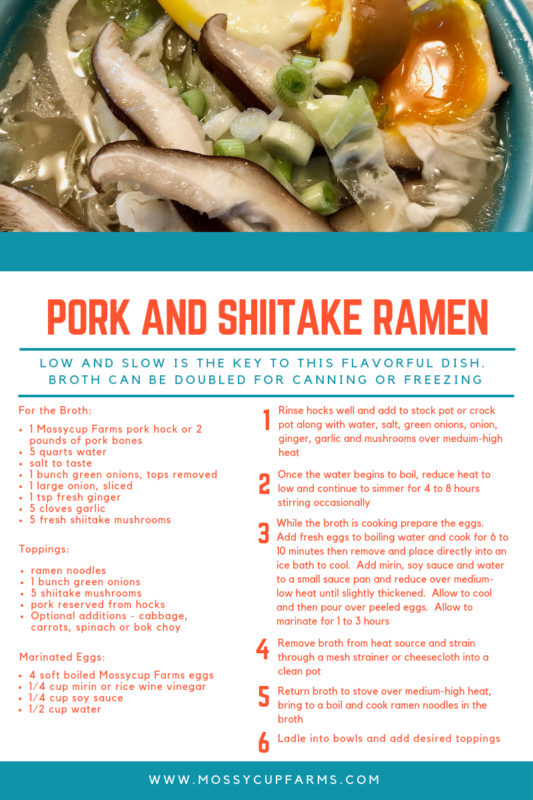 This is what we’ve been up to today... restocking our inventory of handmade soap! Over 25 pounds of Citrus Kitchen, Lavender, Grapefruit & Honey and Bergamot & Cedar is now resting in molds overnight and then will move to the curing rack tomorrow and be available for sale in a few weeks! ... See MoreSee Less

Share on FacebookShare on TwitterShare on Linked InShare by Email